Chillicothe Business College opened as Chillicothe Normal School and Business Institute in 1890 and continued operating until the 1950s. Here are some historical facts about the institution. 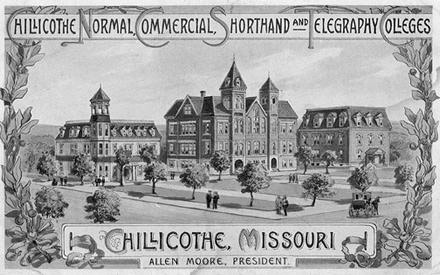 Railroads influenced location: Founder Allen Moore moved to Chillicothe to start the school, brought here because of the town's excellent railroad facilities and the close proximity of his wife's relatives in neighboring Linn County.

Popular institution: An estimated 125,000 people passed through its doors. At one time, the college was considered a pioneer in the field of teacher training. The campus eventually grew to eight large buildings and required a staff of more than 100 people.

Affordable: CBC made going to school affordable, even during the Depression years. Students could sign a note with the school agreeing to pay one-third of their expenses in cash and the other two-thirds upon graduation through one of the many different work programs.

By the early 1950s, the school's enrollment began to decline largely because of expanded business-related courses offered at high schools and a decreased demand for business colleges.